Skull (スカール Sukāru), referred to as Scar in the Tokyopop English translation, is the top commander of the Black Ghost organization and the first major antagonist of the Cyborg 009 manga.

True to his name, Skull's uniform motif is based off of that of a skeleton, with him wearing a black skull-shaped helmet and his black bodysuit employing a ribcage-like pattern in the center.

He wears a long black cape, with a red interior. The yellow lenses of his skull helmet are reflective, and are often shown mirroring the images of whatever he sees as a visual effect (such as 009).

Skull's helmet and uniform change over the course of his appearances, due to Ishinomori's art evolution, though some theorize it can also signify changes within the character.

Skull is a sadistic, domineering, yet cryptic figure who only exists to bring about world domination and war, and along with those he serves under, exists as a figure that represents the evils in mankind, including their greed and willing to cause disaster for gain.

As part of the 00 cyborg project, he specifically orders his operatives to abduct whatever people they can find, making sure that they look for solitary subjects or ones that would leave the least questions if they were to disappear.

But even as a prevalent villain, Skull remains behind the scenes for most of the early manga, only resurfacing for his ultimate plans in domination.

When first seen, Skull is revealed to have an Accelerator, which leads to 009 having doubt that he remained in the exploding base and perished.

By the time of his reappearance in the Yomi arc, Skull is revealed to indeed be a cyborg, but modified to the point where he can survive with his head and arms detached from his body, as no organic parts seem to remain in him at all. Before said body parts are detached, he displays the ability to spew acid from his mouth and can change his arms into a pair of spears.

Skull is only ultimately killed when the brains of Black Ghost melt him down with a laser for failing to defeat 009.

Black Ghost or Skull was the tyrannical leader of an evil organization called the Black Ghost Organization (its main mission is to cause war between two global powers by dealing weapons. When meeting the heads of the organization he suggested the creation of a cyborg army. This lead to production off the 000 models which culminated in a decade long projecting of kidnapping people and waited for the technology to catch up.

Skull was almost killed when the 00 cyborgs entered Black Ghost's Base (what they thought was Black Ghost HQ until later in the manga and anime) and set explosives leaving 009 and Skull to fight one-on-one. It is revealed that Skull is not only a cyborg, but a highly advanced cyborg, soundly defeating 009 using his superior acceleration mode. Only a last-ditch effort managed to save the nine cyborgs (009 held on to Black Ghost whilst plummeting into what looked like a vat of liquid nitrate and then 001 teleported 009 to safety).

The initial design of Skull, at the end of the "Birth" arc.

A variation on Skull's uniform seen in "Cyborg Soldiers: Prologue". 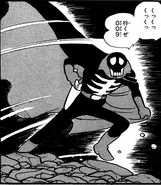 Skull resurfaces in the kingdom of Yomi, just in time for the final showdown.

Skull is called back to the Emperor (and has lost his cape from his accelerator). 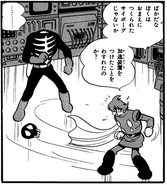 He has no arms.

The brains of Black Ghost melt Skull down for his failure. 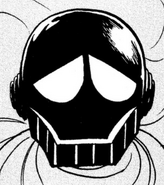 Add a photo to this gallery

Retrieved from "https://cyborg009.fandom.com/wiki/Skull_(Manga)?oldid=13818"
Community content is available under CC-BY-SA unless otherwise noted.