Pan (パン) is a member of the Mythos cyborg team, appearing in the Mythos arc of the manga. He is one of many Greek mythology-themed cyborgs used to challenge the 00 cyborg team.

Pan has the appearance of a small young boy, with a tufted hairstyle and a horn embedded in his head. From the waist down, he has the hindquarters of a goat, fitting his mythological inspiration.

In a 1970s color illustration, Pan is unusually depicted with violet skin, red hair, and hindquarters with green fur.

Pan is curious and excitable, but can only speak in shouts of "Ki!", though he can be understood by his creators. He is used to report news, acting as a go-between for both doctors. He seems to enjoy food as a reward, but becomes irritated when Helena gives him a ribbon for his horn instead.

Over the course of the arc, Pan becomes attached to 003, due to the kindness she showed him.

In being the smallest and youngest, Pan does not have many powers or special abilities, other than his horn being used as an antenna to track his location and transmit information back to Dr. Gaia.

As 003 notes, the horn is entirely connected to his nervous system, which could mean death if it was removed.

Pan, along with the rest of his team, was given the order to bring down the 00 cyborgs for their betrayal of the Black Ghost organization. However, when he heard Dr. Gaia conspiring with Centaur D for a sneak attack, he went reporting back to Dr. Uranus, and then reported Uranus and Apollo's plans to stop D to Gaia.

Gaia bribed Pan with an egg as a reward, claiming that it was now his job to give him information on the other Mythos cyborgs. However, Pan went back to Dr. Uranus and the others, informing them that Gaia planned to upgrade Centaur D.

When 003, 007, and 009 arrived at Magma, Pan and Hippo Man were in charge of lookout, and were the first to challenge them. While 007 and Hippo Man fought, Pan was grabbed by the horn by 009, while 003 urged him to not hurt the younger cyborg. After kicking 009 in the crotch to free himself, he attempted to escape, but was knocked out with the Super Gun.

During the fight of 009 vs. Achilles, Pan assisted 009 due to fearing that Achilles would kill 003, and bit Achilles' heel, causing him to malfunction and die. As the cyborgs made their way to Gaia's base after the fight, 007 had the idea to disguise himself as Pan and sneak in, but 003 decided to let herself be "abducted" by Pan and the Hippo Man-disguised 007.

While in the base, Pan and 007 both attempted to stop Gaia's Mighty Mouse spy and chase it, but kept being foiled due to being unable to stay out of each others' way and bumping into each other, or winding up targeting each other instead of the mouse with their slapstick attempts at catching it (such as 007 sucking Pan up into a vacuum).

Pan, 003, and 007 wound up caught in an electromagnetic trap by Gaia, who had overheard that there were two spy cyborgs in the base. After Dr. Uranus disabled the electromagnetic flow and made it look like an accident, the three were free to leave. However, 003 saw that Uranus was being threatened by Gaia and had 007 go back to rescue him. 003 and Pan attempted to escape out through a sea cavern, but narrowly avoided being eaten by a massive dinosaur. They were then intercepted by Centaur D, who dragged them back to the base.

Pan's whereabouts are not seen after this in the last chapter, though it can be assumed that he died when the base collapsed, or when the island was flooded with both magma and ocean, causing it to sink and vanish.

Pan is not amused by this bow on his horn. 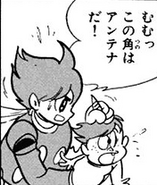 Pan is instrumental to the defeat of Achilles. 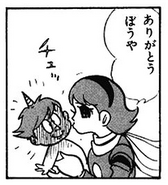 Add a photo to this gallery

Retrieved from "https://cyborg009.fandom.com/wiki/Pan_(Manga)?oldid=10589"
Community content is available under CC-BY-SA unless otherwise noted.