This article refers to the manga incarnation of this character. For the 2001 counterpart, see Nereus.

The cyborg known only as Hippo Man (カバ男 Kaba otoko ) appears in the "Mythos" arc of the manga, as part of the eponymous Mythos cyborg team. He was created by Dr. Gaia and Dr. Uranus, and first appears when he is sent to fight 003, 007, and 009.

True to his name, Hippo Man is a large, gray bipedal hippo with a more humanoid body and characteristics.

He wears a red ruff around his neck, with a matching tutu around his waist.

Hippo Man is a brutish, simple-minded foe who uses his large body and strength to his advantage. He speaks in chants of "Hippo!" ("kaba!").

Compared to the other Mythos cyborgs, he is regarded as a failure by Dr. Gaia for his incompetence, which leads him to being suspicious of the false "Hippo Man" (007) that had abducted 003 and brought her to him.

Hippo Man has strong breathing abilities, which come in handy when he exhales a gust of breath from his nostrils, the force of which can disrupt the ground and cause small explosions.

He also showcases the ability to stretch his limbs, as his body has been modified to have the quality of rubber. This is also shown when 007 copies his appearance and abilities, leading to Dr. Gaia to wind up bouncing off of the body when he's hit up against it.

When 003, 007, and 009 entered Magma Island, they were ambushed by Hippo Man, who got into a one-on-one match with 007. He was defeated by 007 taking his form and using it against him. 007 would then use Hippo Man's form in a ruse to "abduct" 003 and bring her back to Dr. Gaia and Dr. Uranus, to infiltrate their laboratory. 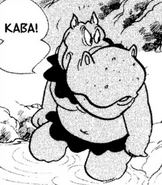 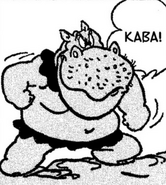 Hippo Man is taken out, courtesy of 007.
Add a photo to this gallery

Retrieved from "https://cyborg009.fandom.com/wiki/Hippo_Man?oldid=10344"
Community content is available under CC-BY-SA unless otherwise noted.